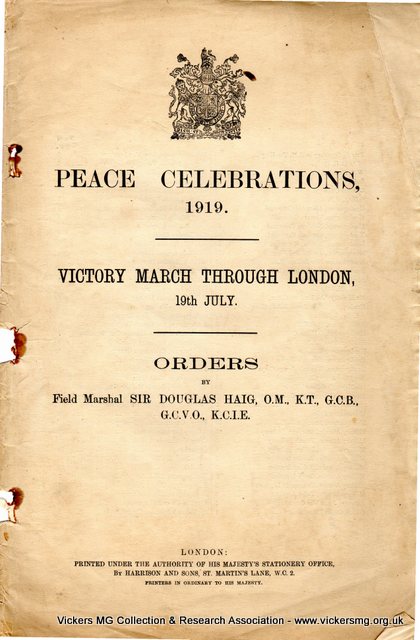 Well I couldn’t figure out where this fits on the Vickers website at the moment so I thought I’d go ahead and write a blog article about it instead.

This document was given to the Association last year to digitise and add to the archive as it was seen as something quite important given the Great War centenary that is coming to an end. This reminds us that 1919 was not only when peace was celebrated but much of the Army was still in service and would be waiting to come home for some time.

In summary, it’s the full staff orders for the Peace Celebration parade that was held on 19th July 1919. There are three sections:

It’s a really interesting document to go through and it would be great if something similar would take place in 2019 to commemorate our celebration of peace.

It’s available to download as a low-resolution PDF by clicking on the cover below or here. I’ve gone through it and it is readable in most places – sometimes it’s better to zoom out than in. I’ve kept it low-resolution to keep the file size down but the high resolution version can be purchased using the button at the bottom of the page.

Some sample pages below.