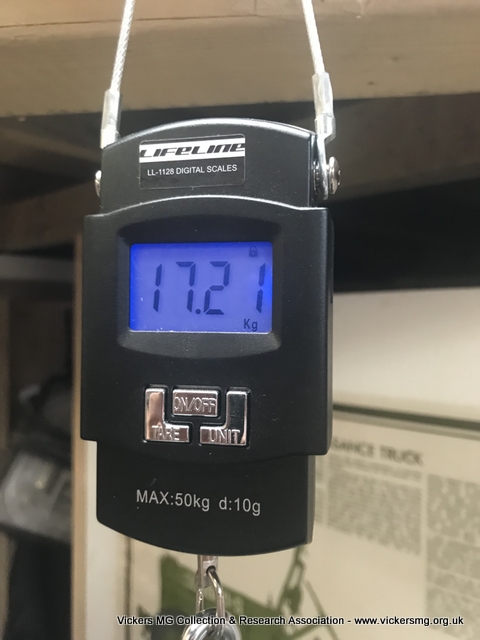 This article isn’t an extension of my previous blog article about light, medium and heavy machine guns, although it’s something I could rant about quite a bit.

When doing an annual ‘spring clean’ of the Vickers collection this month, we had to get all of the guns off of their tripods and give them a once-over.  During this, I noticed that one of the guns felt significantly heavier than the others. It was a Mark I gun that had been converted from a Mark XXI when the Australians no longer required them in their armoured vehicles. It was a 1945 gun so one of the last few made and I thought it would be interesting to compare it with one of the earliest guns in the collection – L 1053 from May 1915.

This immediately showed a difference of 2.7 kg which equates to an increase of 20% over the 30 years of manufacture. Quite remarkable. It made me think what the differences would be on some of the other examples in the collection.

An early Vickers Mark I manufactured at Erith in May 1915. It is extensive lightened and features some of the earliest manufacturing techniques. They include the ‘five-arch’ top cover and side plates with extensive machining. This was very labour intensive and the machining reduces over the period of the Great War as production speeds had to increase to ensure that the needs of the army could be met regarding the numbers of machine guns in service. It was also made with the earliest type of fluted water-jacket.

One of the most noticeable accessories affecting the man-carry of the gun was the Sangster Auxiliary Mounting. It meant the gun could be used without the Mark IV tripod in an emergency. It was left on the gun for the majority of the time as it wasn’t easily removed.

An Australian-made Vickers originally built as a Mark XXI but then converted, in 1945, to a standard Mark I. This meant that the original features of the Mark XXI, which included different filler plugs at the rear of the water-jacket and the pistol grip removed and replaced with a cross-piece. All the guns of this period feature the dial sight bracket as part of the standard equipment.

All of the Australian guns were made with very simply produced components that allowed for mass production. They were made with the smooth water-jacket.

Another Australian-made gun but this one was a Mark I made in 1939/40. Other than conversation elements from the Mark XXI, it is the same as B 2296.

At the time of weighing, it was fitted with the water-jacket cover and the flash eliminator.

This example in the collection was built at the end of the Great War, in 1918, as is one of the early examples of a ‘smooth’ water-jacket. It isn’t, in fact, smooth as some excess weight was machined from the water-jacket, presumably by lathe.

Despite being a Great War Mark I gun, it is fitted with accessories as used in the Second World War. It is used as such for displays with the VMGCRA.

The example of a Mark I gun was made at Vickers-Armstrongs in Crayford. It was made in 1943/44 and is quite crudely finished compared to the other examples shown here.

It has undergone some repairs to the crosspiece as it’s believed that this example was in use with airborne forces and has been parachuted from an aircraft.

It is fitted with the water-jacket cover and flash eliminator.

The variations in weight are affected by the accessories but, given the fact that similar accessories are in use on several of the examples, it doesn’t have a significant influence.

Another factor to consider is that all of these examples are deactivated and this involves some metal being removed and some being added. There may be some variations because of the different people carrying out the deactivation work but unlikely to be significant.

And of course, none of these are filled with any water so that has to be added when considering the weights that the machine gunners had to carry – in this case the No. 2 of the machine gun team.

The table below is a summary of the differences between the different guns, sorted by date of manufacture from left to right and top to bottom.

Whilst B 2296 is shown as lightest of the smooth water-jacket examples, it’s possible that this was distorted by the lack of water-jacket cover and flash eliminator.

It’s worth adding that the 1914 handbook for the Vickers gives the empty weight as 28 1/2 lb (12.9 kg) so 0.8 kg from the tested weight. It’s more interesting that the 1945 data summary for the Canadian Electrical and Mechanical Engineers (armourers) shows that the weight of the gun is 30 lb when empty. This is 13.6 kg in metric weight and clearly reflects the earlier manufactured guns, not the later. It would clearly come as a surprise to the soldiers who then went on to carry the gun into action.